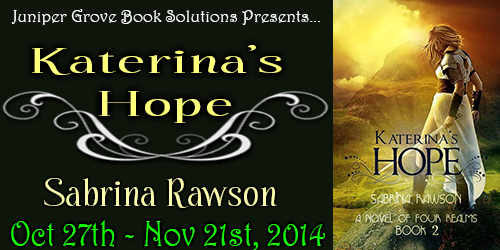 Lady Katerina Kastekanos believes Striker Wells is the other half of her heart. Assisting the High Council in talks of peace she struggles with deep rooted fears of abandonment, but can she be true to the man she has fallen in love with before her darkest secret can destroy any hope for a future with him? Before anyone can embark on the quest for the Firing Sword Katerina is kidnapped.

Striker Wells is son to Queen Briksanna and knowing Katerina is her best friend he does not feel ashamed of his love or his commitment to pledge his life to her. Before their lives can begin Katerina is kidnapped. Devastated, Striker searches for his lost love sworn not to stop until she is found. The woman he finds is not the same woman when she was taken. Will Striker be able to overcome his personal demons of abandonment to accept the man Katerina will need him to be for them to have a lifetime of happily ever after?

Although Sabrina Rawson had been physically writing for two years the ideas that conceived her first novel had been percolating in her mind for many years. In many ways she found life experiences had influenced her story although written in fantasy format.

“There is no passion to be found playing small – in settling for a life that is less than the one you are capable of living.”

No truer words could have been said. After her first cancer battle four years ago, she was in the mindset to survive, get back to my swing of things. Problem was she couldn’t. She wasn’t the same person anymore. She relapsed by the end of the first year. She survived that experience exhausted and has had multiple tumors pop up ever since. To say her health presented a mental and physical challenge was putting it mildly. She wanted to be more, do more, and was determined to reinvent herself along the way.

What she left behind after that first surgery, was her passion for life. Cancer didn’t take that away, she put buried it along with her drive and ambition. Her creative muse happily skipped right along with the rest of her dreams leaving her disconnected. She had to rediscover herself and it was a slow personal process. Four years post her first surgery and even if she had to do it all over again tomorrow, so what! She refused to settle for a life less than what she could create for herself.

Sabrina lives in Sonoma County heart of the wine country of California enjoying life in the rural land happily married to a wonderful supportive husband. You can always find her reading a book or cooking a meal for her multitude of children.