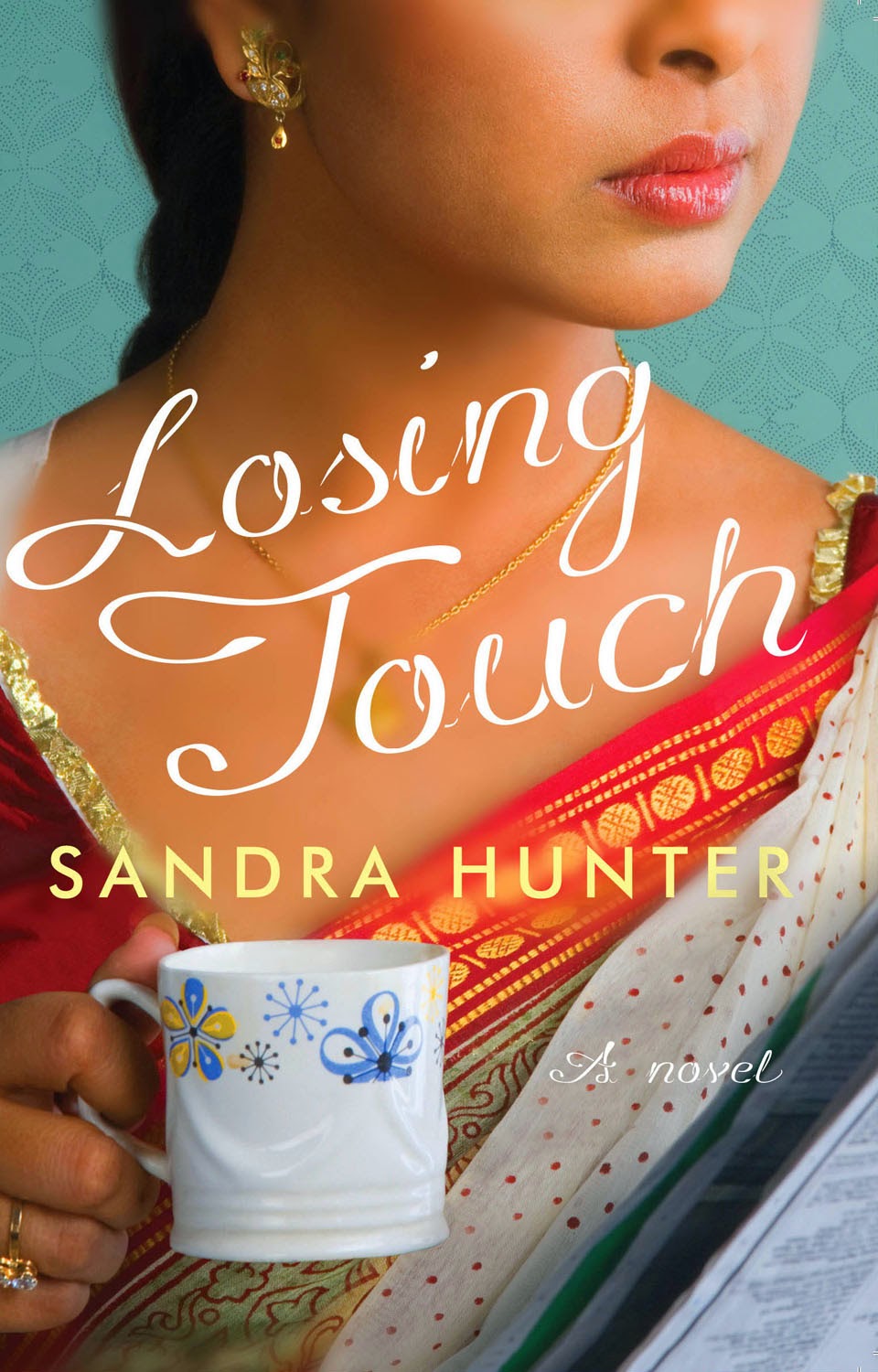 After Indian Independence Arjun brings his family to London, but hopes of a better life rapidly dissipate. His wife Sunila spends all day longing for a nice tea service, his son suddenly hates anything Indian, and his daughter, well, that’s a whole other problem. As he struggles to enforce the values he grew up with, his family eagerly embraces the new. But when Arjun’s right leg suddenly fails him, his sense of imbalance is more than external. Diagnosed with muscular dystrophy, he is forced to question his youthful impatience and careless cruelty to his family, until he learns, ultimately, to love them despite — or because of — their flaws. In a series of tender and touching glimpses into the shared life of a married couple, Sandra Hunter creates strikingly sympathetic characters — ones that remind us of our own shortfalls, successes, hypocrisies, and humanity.


The early spring sun shows petulantly behind breaking clouds as they walk slowly to the local shops; Arjun with his walking frame, Sunila with the pull-along bag. His walking frame catches on the smallest pebble, the tiniest crack. A dog ambles by and stops to sniff his shoes. He is delighted with the insult. ‘See this fellow? He has no respect. Get along with you, you old tramp.’ His voice is fond over this attention. The dog salutes him with a cocky glance and a half-laugh, coral tongue dragging out of the left side of its mouth. It trots off, its liver and white markings jogging under the deep green of the privet hedges flanking the road. 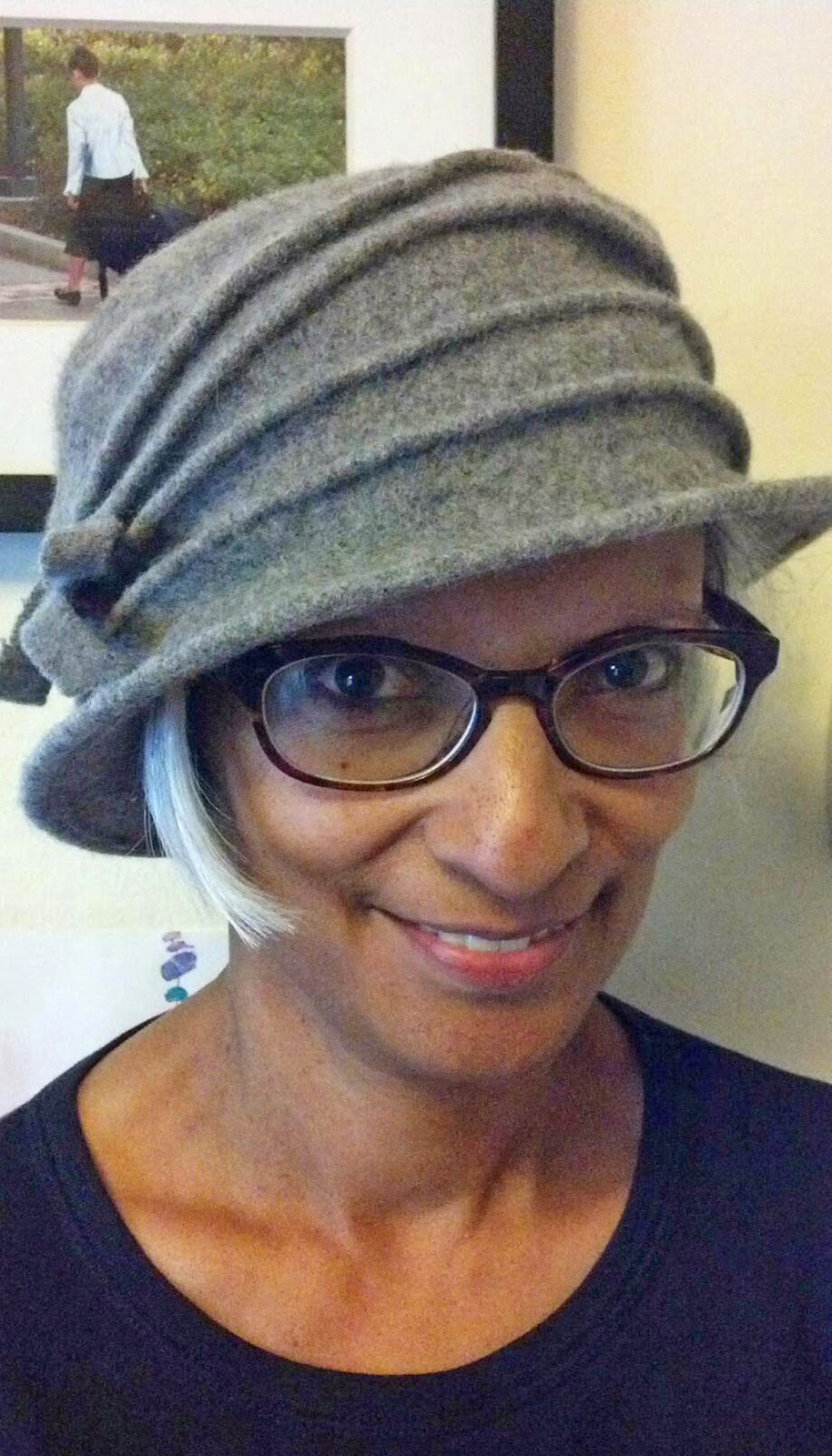 Sandra Hunter’s fiction has been published in a number of literary magazines and received awards including the 2014 H.E. Francis Fiction Award, 2012 Cobalt Fiction Prize, 2011 Arthur Edelstein Short Fiction Prize and three Pushcart Prize nominations. Her debut novel, Losing Touch, was released in July (OneWorld Publications). She lives in Simi Valley, CA, with her husband and daughter, and is always on the look out for the perfect gluten-free cupcake.


Did you do any kind of research to determine the details of your characters’ lives / lifestyles?


My father had Spinal Muscular Atrophy. This gave me a sad but unique opportunity to watch his muscular degeneration. I also saw him develop patience and humor, even as he was losing his body’s independence. One of the most inspiring things about chronic disease is what can be gained even as the body loses its faculties. I looked up the symptoms of SMA and they were so poetic that I used them as titles.


My family was one of the first Indian families to settle in Hayes (North London), so I drew on the neighborhood for geography. I also used details from family parties for details about food and the throng of cousins and aunts and uncles. Anyone who has a large family can probably identify with those parties!


Do you have strange writing habits?


Don’t all writers have strange writing habits? I procrastinate, tidy my desk, eat cheese and then, usually at the last moment, have an incredible surge of writing energy. Maybe the cheese eating might be considered strange. 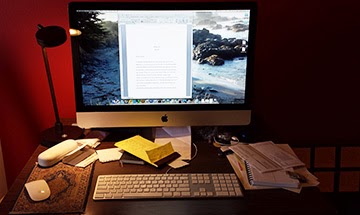 Clearly it’s time for me to tidy up my desk! On the lower right you can just see my story-board with orange post-its. That’s for my novel-in-progress set in post-apartheid South Africa.


I have to nibble something when I’m writing, and carrots just don’t do it. I’m a salt-fiend, so it’s absolutely essential that I don’t keep chips in the house. Those chili-lime cashews from Trader Joe’s? Insane. 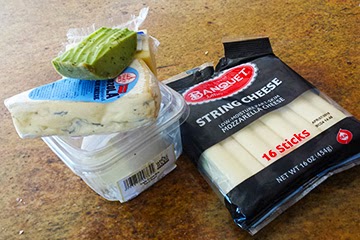 
Where did you grow up?


I grew up in England. My family moved a lot because my father was in the Royal Air Force, so he was posted to numerous places. That probably makes me the equivalent of an army brat! I was born in a little place called the Isle of Ely. It used to be an island but now it’s part of Cambridgeshire, where that bumpy bit is on the south east of England. We didn’t stay there long, though. My first memories are of Trowbridge, Wiltshire, which is south west – very rural England. You’ll find those thatched cottages and little rippling brooks that are so popular in calendars! Most of my growing up was in Hayes, Middlesex, on the outskirts of London.

How did you get into writing?


I used to write terrible poetry as a child. “Plop plop splash splash down they come/tiny little raindrops wetting everyone” and so on. I also used to talk to myself a lot. I’d make up whole conversations on my way to school, imagining that I could actually use them in real life situations. Of course, that never happened, but it stuck with me. Part of my MFA was play writing, so that conversational tic proved useful! After my daughter was born, I switched from play writing and the dialogue habit moved into my fiction. When my daughter was about 2, I started sending out short stories and was lucky enough to have a few accepted. That was enough encouragement to keep writing and sending stuff out.


What sacrifices have you had to make to be a writer?


You know that old saying that you write for love not money? So true. Well, sometimes you can make money. Literary magazines offer monetary prizes. But you can spend a lot in submission fees, too! Since I left graduate school, I’ve focused on taking part-time jobs so I have time to write. Before my daughter was born, I worked as a paralegal. Now I teach part-time at a local college. You don’t go into writing for a luxury lifestyle. However, the gains because of writing – especially meeting people, including other writers – are infinite. I love running writing workshops just to hear what other people are writing, what their inspirations are. Women are incredible. They take care of kids, manage laundry, often work full time jobs AND they write. Can you imagine how women would prioritize politics if they were in charge? End of world hunger. Immediately.

Do you think that the cover plays an important part in the buying process?


No doubt about it. While I look for authors I know and read reviews about new authors, I’m always drawn to an eye-catching cover. The cover for Losing Touch is attractive, I think – although I’m not sure it has very much to do with the actual story! From a PR point of view, it’s an attention-grabber.


What do you think of “trailers” for books?


I’ve seen these and been blown away with how poised, funny and interesting the authors are. I think they’re a cool way of introducing the author. I’d have to practice a lot before I could get the nerve up to do one!

How did you come up with the title? Names?


Title: This came after the publisher asked me to rethink the original title, which was Waiting for Heaven. I wanted something that indicated a loss of identity as well as a loss of relationships. There was also the literal loss due to the neurological disease. Book titles are hard!


Names: These were all Indian names, which were appropriate for the family. The first part of novel is set in the ‘60s and ‘70s, so Indian were still considered exotic for Londoners. My father once told me about a new Indian colleague, Bhupindra. Her work mates asked, “Oh, your name’s too hard. Can we call you Boopie?” She calmed replied, “My name is Bhupindra. You’ll get used to it.” In the ‘60s it was a big deal for an Indian – and a woman – to insist on something, even if it sounds trivial to us now.

What was the most surprising things you learned in creating your books?


Learning how to handle PR. I had no idea that this was part of being an author. While I had support from the publicists at OneWorld, I did most of the organization for my book tour. I also learned that one of the most effective business cards is a bookmark. I designed my own online fairly cheaply.

This is the front and back of my bookmark. I like the friendly rounded corners!


I love talking to people in person, but outside of Facebook I have little experience in connecting online. So a blog tour is an exciting way to be introduced to this community.

THE AUTHOR WILL BE GIVING AWAY: