Archimedes: An Ancient Greek Genius Ahead of His Time

Archimedes was a Greek mathematician, scientist, mechanical engineer and inventor who is considered one of the greatest mathematicians of the ancient world. The father of simple machines, he introduced the concept of the lever and the compound pulley, as well as inventions ranging from water clocks to the famous Archimedes screw. He also designed devices to be used in warfare such as the catapult, the iron hand, and the death ray. Archimedes was one of the world’s first mathematical physicists whose inventions were actually applied to the physical world.


The Life of Archimedes: Syracuse and Alexandria

Born in Syracuse on the island of Sicily in 287 BC, Archimedes was the son of an astronomer and mathematician named Phidias. Very little is known about his family, early life, and schooling other than that he was educated in Alexandria, Egypt, then the chief center of Greek learning.

Alexandria is where Archimedes studied with disciples of Euclid, a famous Greek mathematician, before he returned to Syracuse for the remainder of his life.

In the third century BC, Syracuse was a hub of commerce, art, and science. The Ancient Greek biographer, Plutarch, mentions that while in Syracuse, Archimedes offered his services to King Hiero II. It was due to his relation with the king, and his son Gelon, that Archimedes achieved fame. 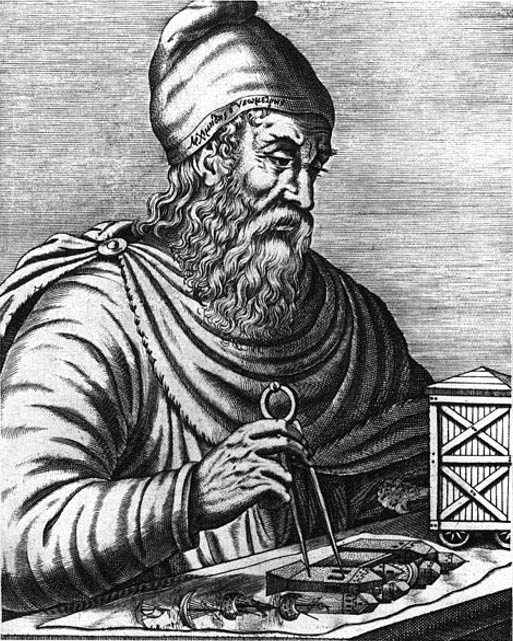 Archimedes is best known for his inventions created during the reign of King Hiero II, such as the Archimedes screw. Originally developed by the ancient Egyptians, it was a device used to raise water from a lower to higher level which was improved upon by Archimedes. The machine consists of a hollow tube with a spiral that can be turned by a handle at one end. When the lower end of the tube is placed in the hull and the handle turned, water is carried up the tube. Today it is still in use as a method of irrigation in developing countries and used to lift loose materials such as grains. 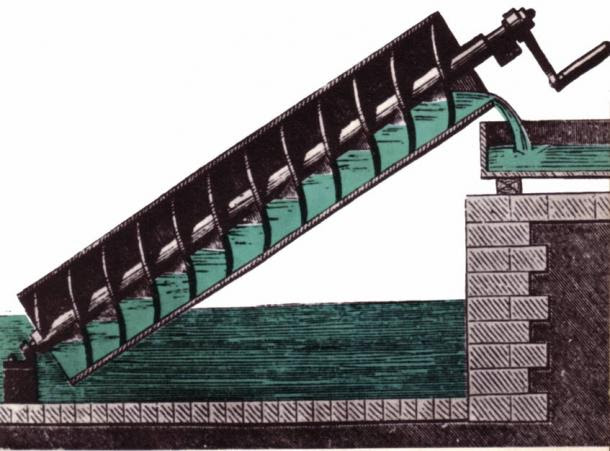 Situated between Rome and Carthage during the Punic wars (264 BC to 146 BC), Syracuse proved to be in the way of Roman expansion. In 214 BC, pro-Carthaginian factions within the city sided with Carthage against Rome. Not long after this, the Roman army sailed to Syracuse with the intention of destroying the city.

Archimedes helped repel the Romans with his brilliant inventions. He fortified the city walls with military contraptions such as catapults and ballistas which could fire projectiles long distances and attack enemy ships. These weapons were used in battle and enabled Syracuse to hold out against Rome for about three years.

One of the most famous machines invented by Archimedes and used against Roman ships during the siege of the city was the stone throwing crane. Consisting of a rotating beam that sat on a platform, it had a counterweight at one end (i.e. a large stone) and it was suspended by a rope at the other end. As an enemy ship approached the wall, operators of the device released the winch, enabling the load to pass over the wall by rotating the balance beam. When the load hovered over the ship, the rope was cut so that it would fall and cause substantial damage.


The Claw of Archimedes

A similar invention was the Claw of Archimedes, also known as the Iron Hand. A kind of ancient crane, it had a metal grappling hook at the end of it, could reach over city walls, grab enemy Roman ships and destroy them on the rocks. The Claw of Archimedes was reportedly used in defense of Syracuse although no one knows exactly how it looked. Later Greek and Roman historians, such as Plutarch, Polybius, and Livy spoke of the device in their writings. Here is a description of the Claw, from the Plutarch’s Lives:

At the same time huge beams were run out from the walls so as to project over the Roman ships: some of them were then sunk by great weights dropped from above, while others were seized at the bows by iron claws or by beaks like those of cranes, hauled into the air by means of counterweights until they stood upright upon their sterns, and then allowed to plunge to the bottom, or else they were spun round by means of windlasses situated inside the city and dashed against the steep cliffs and rocks which jutted out under the walls, with great loss of life to the crews. Often there would be seen the terrifying spectacle of a ship being lifted clean out of the water into the air and whirled about as it hung there, until every man had been shaken out of the hull and thrown in different directions, after which it would be dashed down empty upon the walls. 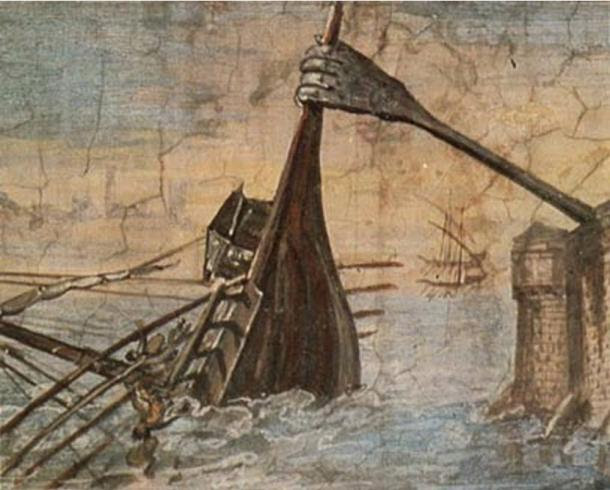 Archimedes' Most Controversial and Terrifying Invention: The Death Ray


The most controversial and arguably the most terrifying of Archimedes' inventions was his famous heat or death ray. Sometimes referred to as “the burning mirror”, it was supposedly a device which used mirrors on the bluffs of Syracuse to focus sunlight onto wooden ships, causing them to burst into flames.

The device consisted of a large array of bronze or copper shields arranged in a parabola. When the Roman fleet approached, legend says that Archimedes set fire to the enemy galleys using this weapon. However, historical accounts of this death ray did not appear in texts until much later, and it is not mentioned by the ancient historians of the era.

Contemporary writers such as like Plutarch, Polybius, and Livy did not mention the use of mirrors setting ships on fire, though they did discuss some of the defensive devices created by Archimedes. 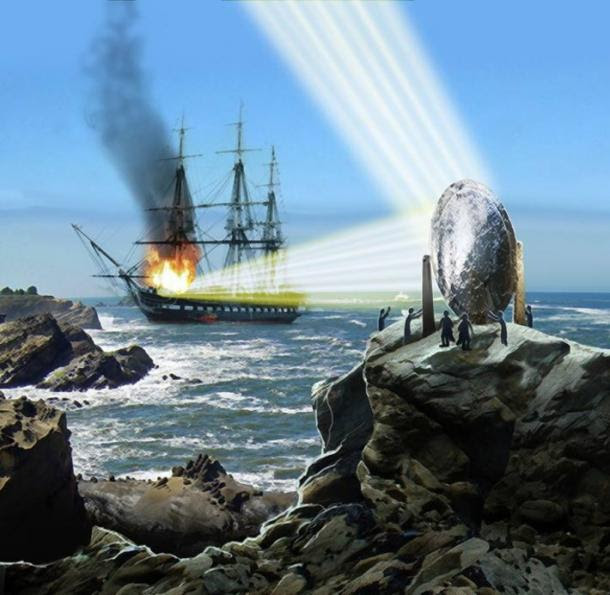 The earliest source which mentions Archimedes employing burning mirrors was written by Anthemius of Tralles in 500 AD, some 700 years after the fact. In his treatise entitled, On Burning-Glasses, he mentioned how Archimedes may have used a parabolic mirror to focus the sun’s rays on invading Roman ships. Lucian (120-180 AD) and Galen (130-200 AD) reported that Archimedes set fire to Roman ships through artificial means, but they don’t exactly state how (see this website for further details). In 1100, the writers Zonares and Tzetzes quoted use of the death ray from an earlier work (now lost) called the Siege of Syracuse, which stated:


When Marcellus [The Roman General] had placed the ships a bow shot off, the old man [Archimedes] constructed a sort of hexagonal mirror. He placed at proper distances from the mirror other smaller mirrors of the same kind, which were moved by means of their hinges and certain plates of metal. He placed it amid the rays of the sun at noon, both in summer and winter. The rays being reflected by this, a frightful fiery kindling was excited on the ships, and it reduced them to ashes, from the distance of a bow shot. Thus the old man baffled Marcellus, by means of his inventions. 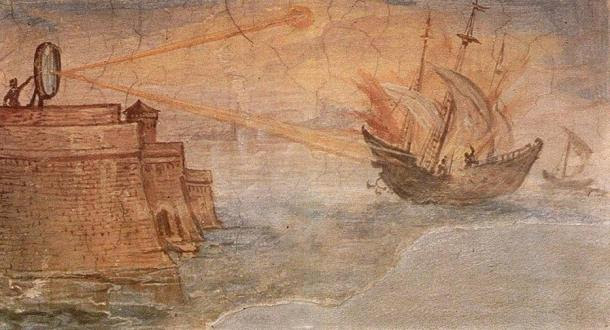 What is known is that the principles of Archimedes' heat ray are understood today and it is possible to replicate the burning mirror using modern technology. Possibly, Archimedes would have known about these same principles when he was alive, but whether or not he could have actually built such a weapon is a different story. Interestingly, the television show MythBusters devoted three episodes to testing the myth of the Death Ray by using 500 large, flat, modern mirrors. In all three episodes it was seen as implausible.


"Do Not Disturb My Circles"

Archimedes died in 212 BC at the age of 75 when Syracuse was captured by Roman forces. Legend says that he was working on a math problem when a Roman soldier ordered him to meet with his commander. Archimedes reportedly refused to do so which angered the soldier who killed Archimedes on the spot. His last words were reportedly “do not disturb my circles.” Cicero described visiting the tomb of Archimedes, which he said was surmounted by a sphere and a cylinder, representing Archimedes' mathematical discoveries. 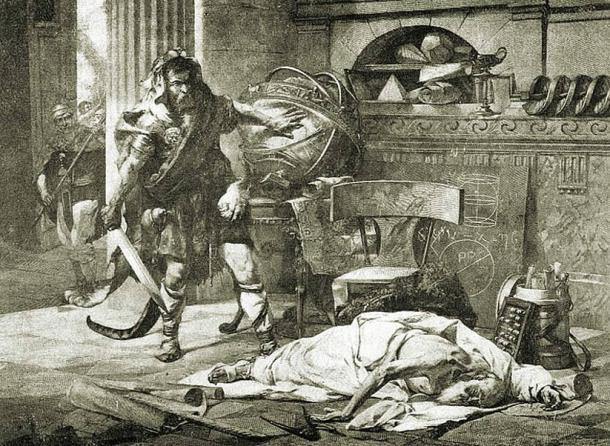 Many say that Archimedes' death brought an end to a golden age of mathematics. His writings were seen as the definitive texts on geometry at the time and held in an almost religious light. Greek mathematics gradually declined with the Dark Ages and an interest in mathematics was lost until the Renaissance.

While the originals have long been lost, many of Archimedes writings survived and were copied by scribes who passed his work on down through the generations. In the 10th century, one copy of his most important work, called the Method of Mechanical Theorems was made.

However, in the 1200s, a medieval scribe ran out of parchment and recycled the 300-year-old pages into a book of prayers. He trimmed the parchment, erased the text, and turned the sheets at a right angle before inking on the prayers.

Called a “palimpsest”, the manuscript began its new life at the Mar Saba monastery in the Judean desert in the Middle East, where Archimedes' work was unread and unknown for centuries. The palimpsest would turn up again rather mysteriously in a library in Constantinople in 1906 before it went missing again until it was auctioned off in New York in 1998. Today this book is the sole surviving source for two works by Archimedes, which are now fully legible through imaging technology. 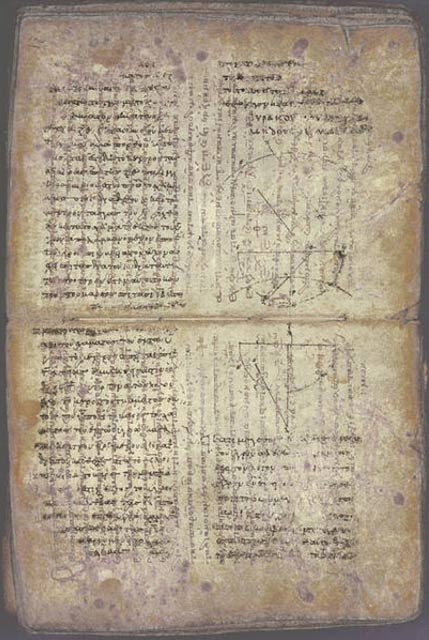