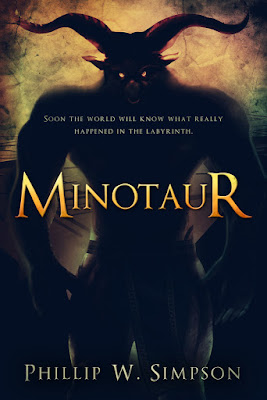 “Where shall I start?” asked Minotaur.

Ovid made an expansive gesture with both hands. “Where else but the beginning of course.”

Minotaur nodded his huge head. “Yes,” he said. “Yes,” his eyes already glazing over with the weight of thousand year old memories. And then he began.

So begins the story of Asterion, later known as Minotaur, the supposed half bull creature of Greek legend. Recorded by the famous Roman poet, Ovid, Asterion tells of his boyhood in Crete under the cruel hand of his stepfather Minos, his adventures with his friend, Theseus, and his growing love for the beautiful Phaedra.And of course what really happened in the labyrinth.

This is the true story of the Minotaur.

“Lovers of mythology will enjoy this coming-of-age adventure and be surprised by the believable, "true story" of the Minotaur.”~ School Library Journal

Scene 1: Asterion training with his brother, Androgeus
Androgeus moved in instantly for the kill. He knew my abilities by now, only too aware that I was much slower than him. He did, however, sometimes forget about my strength, which seemed to grow daily. Not only that, but he appeared a little confused by the club. He was used to facing me shield to shield, sword to sword. Normally, he’d use his usual tactics, blocking my shield and using his superior speed to strike like a snake.

This time he had no shield to block.

He thrust his shield forward. I knew what it was. A decoy. He thought I would attempt to block his shield thrust with my club, and then he would strike with his sword while I was distracted. This, I realized, would once again end in defeat. Instinct kicked in then. I did what came naturally. Holding the club in both hands, I swung mightily at his shield. A bestial roar emerged from my throat. I wasn’t angry—it just seemed like the right thing to do.

Nobody in the gymnasium that day expected to see what happened next.

By rights, the shield should’ve stopped my blow, at the very least deflect it. Instead, the club smashed into the shield with enough force to shatter it, blasting Androgeus off his feet. He lay before me stunned, looking up at me with what might have been fear. I felt confused. I wasn’t even sure what had happened. I had just channeled all my strength—strength I’d never properly used—into that one blow. I knew I was strong; I just didn’t know how strong.

I felt elated, invincible, powerful, but also I regretted that I’d possibly humiliated and angered Androgeus. Quickly, I dropped the club and extended a hand to my brother. He took it gratefully with a wry grin, and I let out a long breath of relief. He grasped my bicep with his other hand. It didn’t even cover a third of it.

“My, we are getting strong, aren’t we?” he said, clapping me on the back.

King Minos was flanked on either side by his son and daughter. Ariadne and Glaucus. If they were here, I knew something was very wrong. I was brought to the front of the temple, just before the altar, and made to kneel. The altar, I knew, was used to appease the gods in the form of sacrifices.. Sacrifices that often took place after events like earthquakes.

At first, I thought Minos was planning to sacrifice me, and I was filled with sudden terror. Suddenly, I caught Ariadne’s eye and knew that her revenge was altogether more subtle. Glaucus was smirking. I would’ve spat at him if the spittle had any chance of reaching him. As it was, he was well out of harm’s way.

Kyon was carried up to the altar, growling and yelping piteously. My heart went out to him. If I could’ve switched places with him, I would’ve. I said nothing, my mouth dry. I knew it wouldn’t make the slightest difference if I protested.

They released him from the pole but kept all four paws bound. Even so, he struggled mightily and tried to bite. I only wished he had succeeded. Two acolytes held him down.

I could do nothing, bound as I was with two guards standing over me. A cowled priest approached the altar and loomed above the squirming dog.

He went through the normal rituals and formalities. I tried to rise to my feet but was held down by the guards. The priest, having finished the preliminaries, produced a long knife. He held it high in the air and I, unable to watch, lowered my eyes.

Minos was having none of it. He barked a command, and the guards raised my head, forcing me to watch the horrible scene unfolding before me. The knife thrust down in a glittering arc. Kyon yelped once, a high-pitched bark of pain, and then there was silence. Just like that, my friend Kyon was dead.

Minos nodded once, stood, and left the temple accompanied by his children. Ariadne and Glaucus looked back once and were rewarded by seeing the tears streaming down my face.

Scene 3 – Asterion and Phaedra in love

When I say love, we were young, and it was largely innocent—kissing, caressing, and the like. Still heady stuff for a young man, so of course I tried to lure Phaedra away from the palace at any opportunity.

Sometimes, we would lie sheltered from the sun amongst the cyprus and oak trees, talking, kissing, and doing what other young couples in love did. They were probably the best times of my life.

On one such occasion, Phaedra and I had taken some food and a little wine I’d stolen from the kitchen and wrapped up in cloth. We set it down in a clearing amongst the trees and ate and drank our fill. I confess I’d probably drunk more wine than was good for me and was feeling more than a little bold.

We kissed. Reluctantly, I broke the embrace to ask a question that had been plaguing me.

Phaedra looked at me askance, her head tilting slightly to show the perfection of her jawline. I desperately wanted to kiss her again.

“Do you really need to ask such questions?” she replied, her face serious.

“Asterion, you of all people should know I don’t judge based on appearances. To me, you are the most handsome man in the world because of who you are. You are gentle and have a kind soul. That’s more important to me than looks. Besides,” she said, with a twinkle in her eye, “you have big muscles. Every girl likes big muscles.”

“Is that all I am to you? A slab of meat?” I tried to joke, but my tone was all wrong. I knew I half meant what I said. I was only too conscious of my massive size and, like my horns, knew it marked me as an oddity or a strange freak of nature.

Phaedra slapped me playfully. “Most of the time. Sometimes you’re able to string a sentence together that is almost intelligent.”

Phillip W. Simpson is the author of many novels, chapter books and other stories for children. His publishers include Macmillan, Penguin, Pearson, Cengage, Raintree and Oxford University Press.
He received both his undergraduate degree in Ancient History and Archaeology and his Masters (Hons) degree in Archaeology from the University of Auckland.
Before embarking on his writing career, he joined the army as an officer cadet, owned a comic shop and worked in recruitment in both the UK and Australia.
His first young adult novel, Rapture (Rapture Trilogy #1), was shortlisted for the Sir Julius Vogel Awards for best Youth novel in 2012.

He is represented by Vicki Marsdon at Wordlink literary agency.

When not writing, he works as a school teacher.
Phillip lives and writes in Auckland, New Zealand with his wife Rose, their son, Jack and their two border terriers, Whiskey and Raffles. He loves fishing, reading, movies, football (soccer) and single malt Whiskeys.

Connect with the Author: