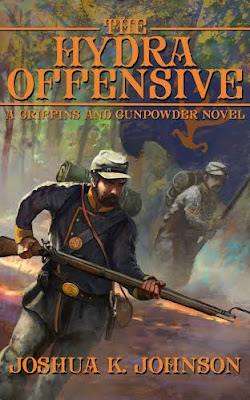 The nation of Ansgar is divided.

In the east, King Eadric Garrard has crushed one rebellion but gets no rest as the rebellion in the West is rapidly spiraling out of control. If he can't get things in line soon, his reign could be at an end.

Raedan Clyve has traveled across the Vast Sea to secure treaties and trade. Unchecked in his studies of magic, his powers are growing beyond his control. The dark path he has set himself on leads to destruction and chaos, but is it too late to turn back?

Kyrie Salas captains the Dragon's Breath, chartered to carry the Western emissaries across the world. She sees the potential in Raedan and seeks to harness it. But will her emotions get the best of her?

War has raged, battles have been fought, and lives lost. But the conflict for the future of Ansgar is just beginning.

Peter Wellstone spread his ledgers across one of the tables and opened them, the books seeming to fall open exactly at the right place. The other council members spread their own books and papers. Alden looked stern, reading the reports for a second time.
An uncomfortable silence hung in the air. “Tychor sent a request to his father,” Alden said at last. “He asked for enough timber to build a small city.”
“Bugger,” Peter said. He was responsible for the distribution of supplies and building materials. “I told you that withholding supplies would lead to trouble.”
“There’s no trouble,” Eadric said. Lumber and nails and carpenters to assemble the buildings were in short supply. The rebuilding of the fortresses in Kerberos were more important than comfortable quarters for the army.

“His Grace will not take kindly to having to send supplies to the front,” Sinclair Dohr said. “His letters have been increasingly critical of the war. And he isn’t the only one with those thoughts.”

“He’s an overweight, pompous ass,” Eadric said with a shrug. “No one listens to what he has to say.”

“They may not listen to what he says, but they watch what he does,” Alden said. “If he decides to limit the number of troops that he contributes to the cause, or if he withholds supplies…”

“Then I’ll deal with him like I dealt with Magnus Jarmann,” Eadric said. As if having four of his dukes rise up in open rebellion weren’t enough, he had to deal with the fifth’s complaining and constant second-guessing. It was a wonder that Medwyn Chalmers stayed in his mountainside castle, rather than bringing his “advice” directly to Eadric.

The king stood and began to pace. In the west, lesser lords and nobles alike had been increasingly vocal in their complaints. Lands trampled by armies, cities devastated, warehouses and granaries pilfered.

“He wouldn’t dare join the rebels,” Eadric said. Of all of the men who owed their position to the Crown, Lord Chalmers was chief among them. His territory produced timber and iron in great supply, but it was Eadric’s subsidies and edicts that made those materials the most sought after in Ansgar.

“If this stalemate holds, they may be more likely,” Sinclair said.

“When the snows melt, there will be no stalemate,” Eadric said. “My soldiers will crush this rebellion once and for all.”

The council didn’t move for a long minute.

“Order supplies shipped to the forward camps,” Eadric said at last. “Order them to winter quarters.”

Joshua Johnson is the author of "Gunpowder Fantasy" The Cerberus Rebellion and the creator of the Griffins & Gunpowder universe. When he isn't working or spending time with his family, he writes novels, short stories and novellas.

He currently lives in Northern Illinois with his wife and young children.

Joshua will be awarding a randomly drawn winner via rafflecopter during the tour an ebook containing short stories set in the same world as the novel, titled The Chesian Wars.